Published On: May 15th, 2020|Categories: People and Places|Tags: Share / Collaborate|

To celebrate the arts community in these uncertain times, we’re creating a virtual open studio, so you can see, share in and take inspiration from what other artists are currently working on. 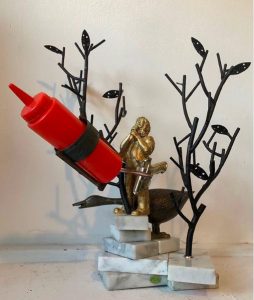 Bruce is a recent addition to the long-term studio roster at Artscape Gibraltar Point, but not new to Artscape. Ages ago Bruce used to work in Artscape’s Building’s department!

We are happy to have him on the island, where he lives and works, creating his unique, found object sculptures such as: “Golden Boy” seen here.

About his work Bruce says, on his website: “While 20th century art history and current 21st century work provide numerous sculptors whose work could be seen as the basis for my own, I credit my grandfather, Moe with planting the original creative seeds. Moe was an insurance agent working out of his Detroit bungalow home for decades and when he hung it up, he retreated to the basement and started knocking out these 3D fish from rusted cans shaped with tin snips and adorned with old bottle caps and assorted flotsam and jetsam. I found them to be fascinatingly expressive.

Like Moe’s work, mine begins with discovery, moves to assembly centred on aesthetics and spontaneity, and finally, but not always, to an ideation, conceptual or surreal stage requiring some adjustments. Minimally they are readymades, but mostly they are found objects disassembled and/or assembled with some interference or alteration on my part.”

You can view more of Bruce’s work online here.

About the Author: Claire Leighton

Claire is a content contributor during the development of artsUNITE/UNITE des arts. Claire enjoys hiking with her dogs and attending live/virtual music shows. 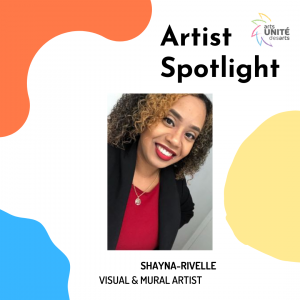 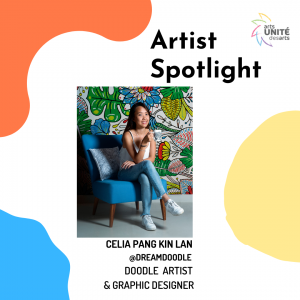 Art in Pandemic! SKETCH celebrates the creativity of young people