Safety in the Scene: Supporting survivors in the arts community

In my previous essay, I reflected on my experience with rape culture as an artist in Toronto. I began to wonder if other people were experiencing the same thing. How could I engage with this community in a generative way?

I had several conversations with artists I knew, who also helped organize important events throughout the pandemic. I created a survey which asked five questions of women or femme-presenting people. The survey was distributed on social media, with the purpose of reaching the exact scene in which I experienced most of my trauma. After reviewing responses from the survey, I interviewed Sedina Fiati. Fiati is the co-founder of the Black Pledge and the resident artist-activist at Nightwood Theater, a feminist theater company. We spoke about healing, transformative justice, power, and collective change.

In this essay, I weave together my research to propose ways in which we can work to keep our community safer from gender-based sexual violence. 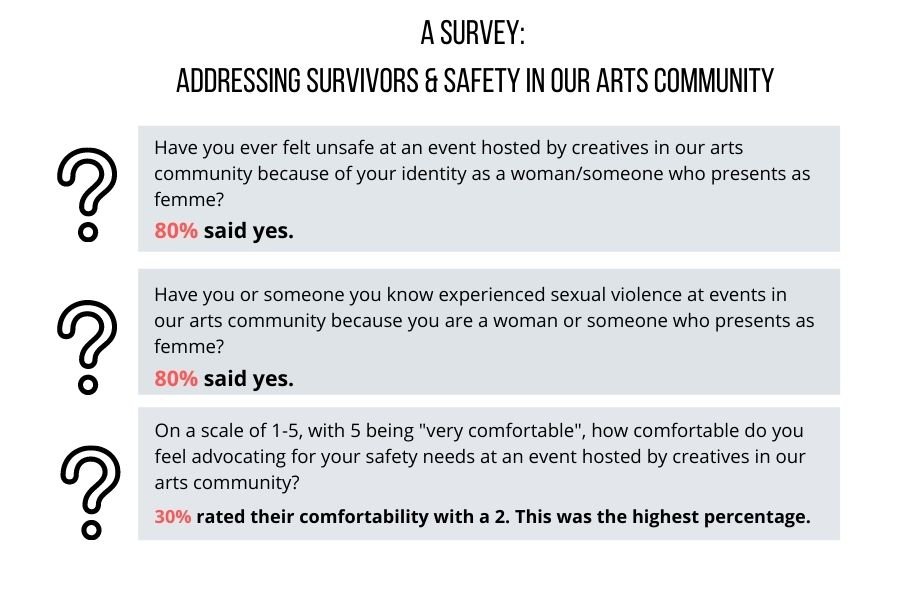 *One participant disclosed that they are a trans-man, but still experience sexual violence because people perceive them to be a woman.

The sample size of the survey was twenty people. This reflects part of the target population, which is the general young artist community in Toronto. Some themes arose in the short answer responses from participants, and those will be addressed here. When asked what could be done to make events safer, here’s what was said. 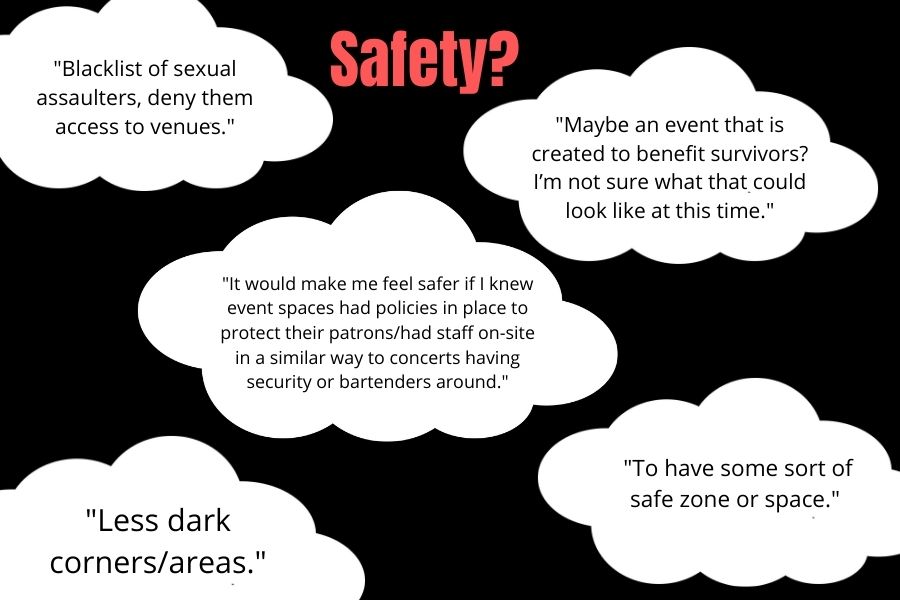 Safety is your responsibility as an organizer. You are curating a space. You have the power to set the tone and vocalize expectations. Here are three ways you can demonstrate your awareness and commitment to a safer scene:

Check out this resource by the Artists Protection Network, which addresses the points above. It also includes various templates that can be personalized.

Some respondents asked for more security. At this time, there is much work to be done. Therefore, under some circumstances, security guards may be needed. However, we must be careful not to perpetuate, in our own communities, the very systems we are working to abolish. Perhaps instead of hiring private security, an organizer can:

There were several calls for men to take on more labour in preventing gender-based sexual violence and caring for folks who are more vulnerable.

“Conflict is going to happen,” said Fiati. “So do whatever you can to learn how to navigate it. It’s hardly ever the ‘work’ [itself]. You can always find time for the ‘work’. But really, it’s how we feel about the work.”

Ask yourself, how do you feel about doing the work required to dismantle a system that privileges you in order to protect others? Understanding those feelings are a good place to start, in addition to:

More spaces for and by femme-presenting folk:

Some respondents expressed a desire for more women and femme-presenting people:

“[Many] women have left the arts because they were harmed,” said Fiati.

They may feel excluded from the community and find participation difficult after they’ve been harmed, in addition to any resulting mental health conditions from their trauma.

But access to resources and support can help with prevention in addition to reducing the harm caused by gender-based sexual violence.

“It’s important to offer things that are free, that are not extractive. [To offer] an exchange that provides care and contributes toward our collective envisioning of the future.”

According to Fiati, annual community check-ins are part of the culture at Nightwood Theater. Sometimes they do writing workshops, where artists gather together and respond to a prompt. Recently, they did a project called Liberated Feminist Futures. Respondents shared what a liberated feminist future would look like to them. Fiati said art was produced from the initiative, such as tote bags and poems, which were given back to those who participated.

“People find healing in all kinds of ways,” said Fiati. “Certainly through therapy, and art itself.”

Such initiatives also provide room for on-going discourse, which is important as we actively construct the spaces we want to see.

What would it look like coming from community members?

It is important we nurture an environment that allows for healing and mourning to decrease the chances of harm being perpetuated.

Working towards a culture shift

The survey also asked respondents what justice/accountability looks like for them. There were less responses to this question. This is understandable; answering a question like this takes deeper introspection, and some folks might not be at a place where they can think about justice. 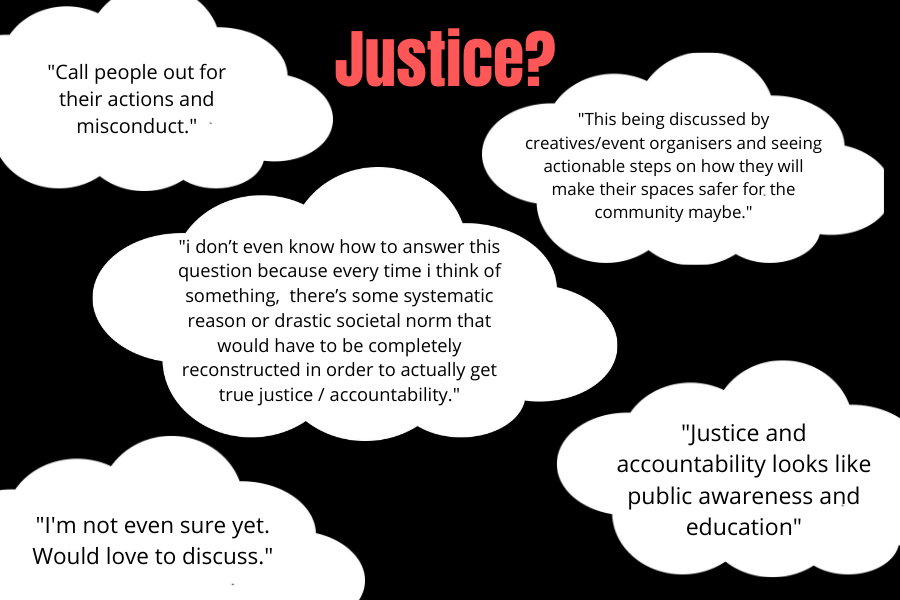 Generally in this section, however, respondents called for a culture shift. Rape culture, cancel culture, and capitalism are not serving us. There is a clear need for change. We must work together for this to happen, which includes actually implementing the aforementioned points and more.

We must find another way to hold people accountable and serve justice. In the survey, respondents often referred to elements of cancel culture, such as:

Perpetrators should be removed from spaces. But perhaps not forever; this is an idea that perpetuates policing  and the prison industrial complex, the very systems we are working to abolish. It’s also not sustainable.

“This idea of crime and punishment doesn’t achieve the healing that the person who was harmed needs,” said Fiati. “And it doesn’t stop the perpetrator from going somewhere else and doing it again.”

“We need to consider the systems of accountability that we have in place. If a perpetrator is never called back into that space, they’ll never have to be accountable for their behavior.”

More discourse is needed on this topic. One idea proposed during one conversation with some artists I spoke to was a forum or focus group where alternatives to cancel culture can be discussed. We agree that perpetrators may need to be removed from spaces and that the power which enables them to harm others needs to be confronted. But what are the most effective ways of doing so?

I spoke with Fiati about the unique position in which young artists, especially those who are racialized, find themselves. Many of the organizers who are taking on roles as community leaders by hosting parties or gatherings may not have the experiences and resources that they need. They are trying to figure out who they are and make ends meet. Sometimes, expending more resources and energy on safety for your event is not a priority when you’re more worried about breaking even.

“Some of the violence that has happened is about scarcity,” Fiati said. “It happened because people felt they had a lack of resources or a lack of opportunity.”

We must resist the scarcity mindset internalized in each of us which tells us we do not have enough and that we are not enough. If we believe that a space will never be entirely safe, or that sexual violence will always exist, we are operating with a scarcity mindset, that we can not do enough and that we do not have enough to change our circumstances. With such a mindset, nothing is accomplished. We must act as if such a future is achievable. We must think and move with abundance.

As organizers, as participants, as artists, this looks like refusing to value the dollar more than a person’s well-being. More than our art. More than our community. We’re more than ticket numbers, and we are not cash crops. We’re people, first and foremost. That has to matter as we create.

Furthermore, our actions can not be performative. They must be must be genuine, meaningful and executable. Time and time again we watch institutions say one thing, and do another for the sake of protecting appearances and profit. We must be different. We can’t say we support survivors and want to abolish the police, but then do not practice what we preach. This work must be fundamental to our daily existence. In this way, as individuals, we can drive collective change. If we are going to shift our culture to one of care and community, trust, mending and healing, there is work to do. After all, we must remember…

About the Author: Daysha Loppie

Daysha Loppie is a writer currently based in Toronto, Ontario. She runs her own arts and culture platform, Good Fortune, which documents the nuance of the Black experience in Toronto and beyond. At the moment, however, Daysha is focusing much of her energy on more personal projects as she continues to heal and grow through written expression. 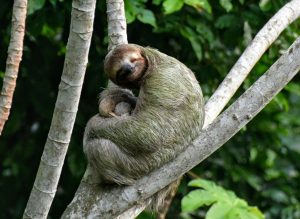 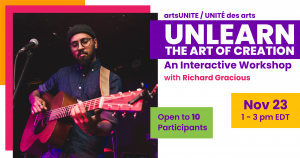 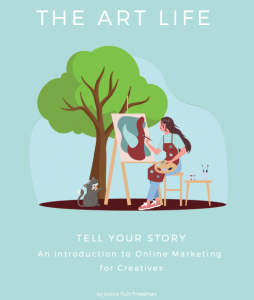 Tell Your Story – An Introduction to Online Marketing for Creatives 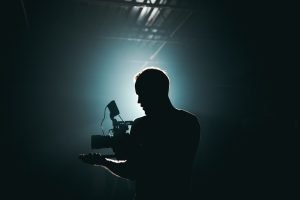